Dean Stevens flew out from his home in Boston to give our souls a good stirring with his inspirational originals and covers. Here’s Dean singing his song, “Old Man in His Garden:”

END_OF_DOCUMENT_TOKEN_TO_BE_REPLACED

Reid Jamieson and Carolyn Mill totally lived up to their reputation when they played to our packed house concert September 28th. Photos to follow, but for now, have a look at their rendition of Prince’s “When Doves Cry:”

Choro das 3 did it again! On Sunday afternoon, Labor Day Weekend, this happy little family from Sao Paulo, Brazil, pulled up to our house in their touring RV and graced us with one of the best concerts we’ve heard ever, anywhere. As a special bonus, while in Portland, OR, they picked up a second percussionist—Brian Davis, of Pink Martini renown! Click any photo below to see the larger, full-crop version:

Featuring Nell Robinson on flute & vocals, Jim Nunally on guitar & vocals, Jim Kerwin on bass fiddle, Alex Aspinall on percussion, and Rob Reich on accordion, the Nell and Jim Band filled the night with spirited, bluegrass- and Americana-infused music while putting everyone at ease with the kind of personal warmth we’ve come to expect in our house concerts. Click any photo below to see the larger, full-crop version:

Larry Murante is one of our all-time favorite songwriters and a powerhouse of a performer. Rod Cook has a reputation as one of the region’s best blues guitarists. When reservations filled up 12 hours after our email notice went out, we knew it was going to be a special night, and it was. Stay tuned for some video clips; meanwhile click any photo below to see the larger, full-crop version:

Our first house concert featured Seattle singer-songwriter Linda Waterfall and Portland finger-style guitarist Anton Emery. The event was videotaped by Vaun Raymond of Seattle. Vaun recorded the following six videos of Linda’s set. We present these in memory of Linda, who passed away January 8, 2019. Her splendid talent and generous personality will be missed.

Family Holiday: Every family has issues. Here, set to the traditional melody for “The Riddle Song,” is Linda Waterfall’s song about a family’s tribulations at holiday time.

END_OF_DOCUMENT_TOKEN_TO_BE_REPLACED 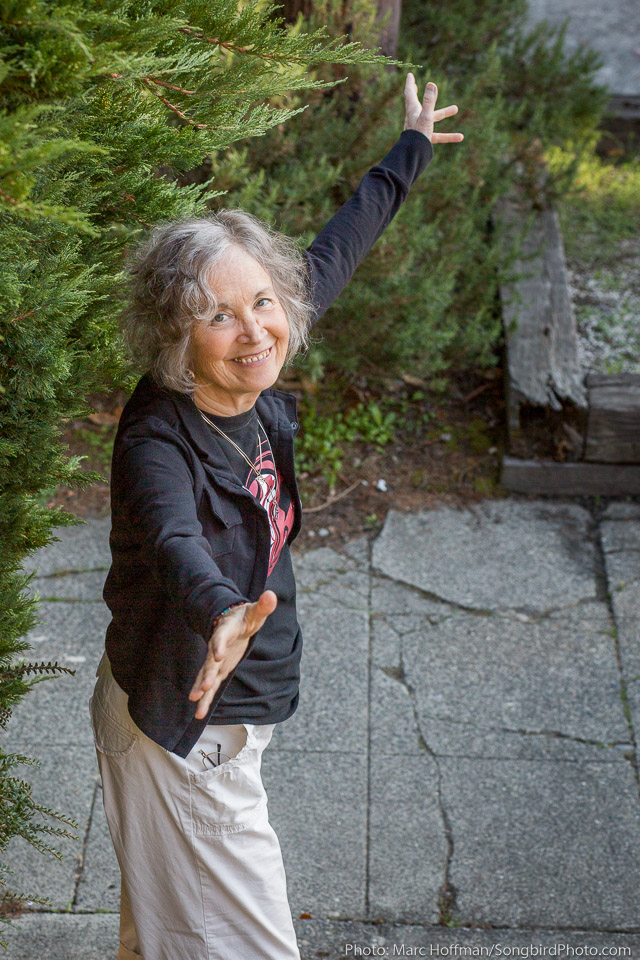 We are sad to announce that Linda Waterfall passed away in Seattle, Washington, on January 8, 2019, following a long illness. Linda left this world encircled by the love of people close to her. She was 69 years old. Linda was a dear friend to us, and performed at our very first house concert, in June, 2015.

Her death is an enormous loss that will reverberate throughout the wide community of musicians, artists, fans, friends, and family who knew and loved her. But it is well to remember the vitality and vibrancy Linda brought to her very full life and the lives of so many others—through her music, art, teaching, compassion, generosity, and keen intelligence.

Linda grew up in a musical family where she received early training in classical piano, music theory, composition, and voice. She graduated Phi Beta Kappa from Stanford University, with a B.A. in visual art.

Her music reflected her classical training as well as a wide range of influences, including folk, jazz, blues, rock, and world music. Her ability to apply her personal genius to these styles resulted in a sound that was unique, beautiful, and celebrated. Over the course of her career, Linda was repeatedly named Seattle’s top singer-songwriter. Her 2015 album, Hometown Girl, was chosen by Seattle Times music critic Paul de Barros as one of his ten favorite albums of the year. And in 2016, readers of Seattle Magazine voted Linda one of Seattle’s 20 most-talented people.

Other equally strong and colorful threads wove their way through Linda’s life. She was a deeply spiritual person who practiced her beliefs with dedication and a sense of wonder. She was a generous teacher who eagerly shared her knowledge and love of music with her students. She was a loyal and open-hearted friend who cultivated a host of life-long friendships across wide spans of time and distance.

Linda was also a joyful and devoted spouse to Bob Searle, whom she married in 1996, and who preceded her in death in 2016. Linda and Bob shared a deep and affectionate bond that was plain for all to see. Although they lived in Seattle, it was at their small, river-side cabin in Forks, Washington, that they forged their fondest adventures and memories. To the surprise of those who knew her only casually, Linda loved to tell how, on summer evenings, they would sit together smoking cigars and sipping whiskey on the cabin porch.

The gifts Linda embodied and shared are a legacy that, through her example and music, will continue to enrich all those who knew her and will continue to know her. Contributions in her name are encouraged. A list of organizations is listed on her website, www.LindaWaterfall.com.

This was a second Duvall House Concerts performance for Marco, who backed up Adriana Giordano in August of last year. Since then, we’ve been hungering for him to return and feature his astonishing guitar technique and beautiful original compositions.

Our delight was doubled when Marco told us he’d be bringing pianist Marina Albero. Marina moved to Seattle just a couple of years ago, and now has an impressive local following in addition to her international reputation.

Correo Aéreo proved to us the unique and essential value of seeing performers up close and personal. In larger venues—in fact, even on YouTube—it’s clear they know know how to move an audience. In our little Duvall living room, however, we had a truly visceral experience of the spirit that drives their music, a spirit emanating from the many cultures their music draws from.

Madeleine Sosin, Abel Rocha, Amy Denio, and Ricardo Guity took us on a journey of traditional and original songs from Latin America, Eastern Europe, and elsewhere—songs that resonated beautifully. We appreciate, too, the generosity of this quartet in playing our tiny venue. ¡Gracias a todo!

The night began with songs—lovely, silly, quirky, poignant, and just plain beautiful—and from there entered another realm when Miles and Karina played their sound scores to the paper-silhouette animations of 1920’s German animator Lotte Reiniger. This was one of those events that claims a unique spot in one’s memories. Visit the Miles & Karina website at http://MilesAndKarina.com/

Here’s a clip of them performing the song “We Did,” by Charlie Gore and Buford Abner:

A big thank-you to Laura Love and Terry Hunt for offering up a great concert to a packed house on Saturday, October 14! Not only was the music superb, but Laura and Terry built a rapport with the audience that was joyful and enthusiastic, even as Laura’s musical stories transported us between dark and light, sadness and celebration.

We felt truly fortunate to have hosted these fine ambassadors of Brazilian music. Adriana and Marco played their music unamplified so that we might hear every nuance of her voice and his guitar. As Marco pointed out, this was just as it would be in Brazil, where a house party would naturally include musicians just sitting around and playing. Lucky for us that we were sitting around, too.

On one of the hottest days of the year, our living room was packed full of music enthusiasts enjoying the music and stories of John Standefer. The air conditioning was taxed to the max, but the show more than compensated.

Find John Standefer on the web at http://johnstandefer.com/.

The Kings of Mongrel Folk—Orville Johnson and Mark Graham—were our 4th house concert, but illness at our home got the whole shebang moved down to Rustic Cabin Coffee in downtown Duvall. Thanks to the hospitality of Rustic Cabin owners Maggie and Nate, the concert was a great success, with plenty of appreciative listeners attending.

Award-winning singer-songwriter Larry Murante (www.LarryMurante.com) made our third house concert a big hit. Here are a few photos from the evening (click to enlarge them):

Our first house concert featured Seattle singer-songwriter Linda Waterfall and Portland finger-style guitarist Anton Emery. The event was videotaped by Vaun Raymond of Seattle. Below are a couple of videos from the concert, plus a track from Anton’s debut CD, Noone Lasses.

Family Holiday: Every family has issues. Here, set to the traditional melody for “The Riddle Song,” is Linda Waterfall’s song about a family’s tribulations at holiday time. [For additional videos of Linda in this concert, see http://duvallhouseconcerts.com/2019/03/22/six-linda-waterfall-videos/.